ShaderToggler is an add-on for ReShade written by Otis_Inf. It allows you turn off and on in-game shaders, like 3DMigoto. This page is a brief guide on how you can use it to toggle shaders, and is also a repository for the toggle groups that people have contributed for various games.

On the releases page, there are two relevant files available for download.

Download the appropriate file and unzip it. Copy over ShaderToggler.addon to the same folder as your game's ReShade DLL for ReShade to be able to use it.

Launch your game, open the ReShade GUI, and head to the Add-ons tab. You should now see Shader Toggler in the list of installed add-ons. 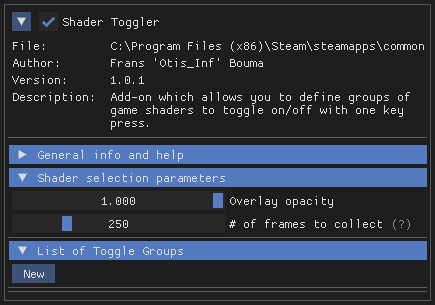 While ShaderToggler can be used to hide many parts and elements of a game scene (including geometry!), it is probably most useful in removing the HUDs of games.

In this example, we'll be using the add-on to remove the HUD from The Witcher 3.

Start by clicking the New button under List of toggle groups. This should create a new entry with a number next to it. Click on the Edit button and edit it to your liking. This group will be named "HUD", since we're removing the HUD, and it'll be bound to Delete, the common keybind for hiding the HUD in tools.

With our new toggle group set up, it's time to start marking shaders. These shaders will be added to the toggle group, and on activation, will be hidden from the scene.

Click on Change shaders and wait for the frame collection process (that should appear in the top left) to complete.

Once you've marked all the shaders, click on Done to register the toggle group. If done right, when you use your key shortcut, it should now hide all the marked shaders at once, giving you a perfect HUD hide!

Save all Toggle Groups!
Or suffer the pain of having to do everything over again on next launch!
This creates a ShaderToggler.ini file in the same directory as the ADDON file. We encourage contributing this to our repository below.

HUD hiding is only one thing possible with ShaderToggler. The process above can easily be used to hide so much more, from various post-processing effects to whole render passes with pixel shader toggles, and even characters or foliage from a scene with vertex shader toggles.

Do note that the add-on does not intercept compute shaders. This is why some effects, like some UE4 DOF implementations, can't be removed with ShaderToggler. These files need to be renamed to ShaderToggler.ini and placed in the same folder as ShaderToggler.addon for the add-on to pick them up correctly.

Have a shader toggler that you want to include? Head up to the issue site page and create an issue with your shader toggler, or contact one of the mods.