This guide assumes you have properly set up the depth buffer in Reshade. Height fog is a shader which inserts an infinitely big plane in the 3D world of your game and applies fog effects on that plane. How to control this plane to create atmospheric fog effects in your scene is described in this guide.

It's important to realize that the Height fog shader has no idea what is up / down / left / right in your 3D scene. All it knows is the camera looking at the scene. This means that when you enable the shader in the Reshade overlay, the height fog is relative to the camera and when you move the camera, the height fog moves with it.

It's therefore not really useful for videos. 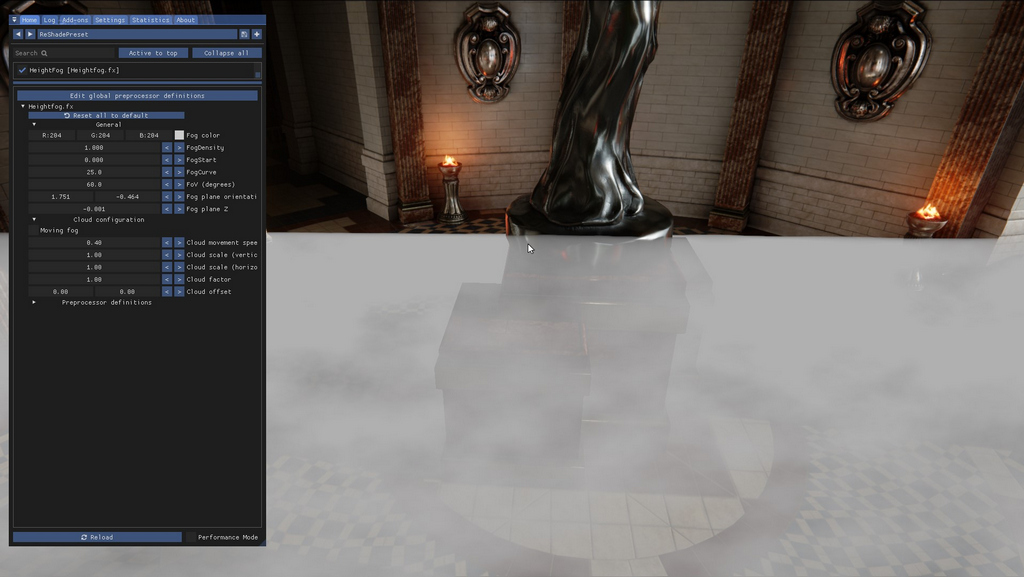 Height fog with its default settings

This looks pretty odd at first, but remember, the fog is relative to the camera and it doesn't know what's up/down, so it doesn't know the camera looks down at an angle at the scene. The Heightfog controls however allow you to rotate and move the fog so it looks like it's on top of the floor of the temple we're looking at.

The first parameter to change is the Fog Plane Z value. To move the fog down, you have to make the value smaller, so more negative. By default it's -0.001, and if you make it smaller, like -0.021, the fog moves downwards (still relative to the camera!). It'll also become more fluffy as there's more space at the top of the fog layer.

Moving the Z further down doesn't always help. Especially in our example above where we're looking at an angle at the floor, we need to rotate the fog.

In our example above, if we move the Z down a bit, and then change the second orientation value, the pitch, we can aligh the fog layer with the floor. It'll then look something like this: 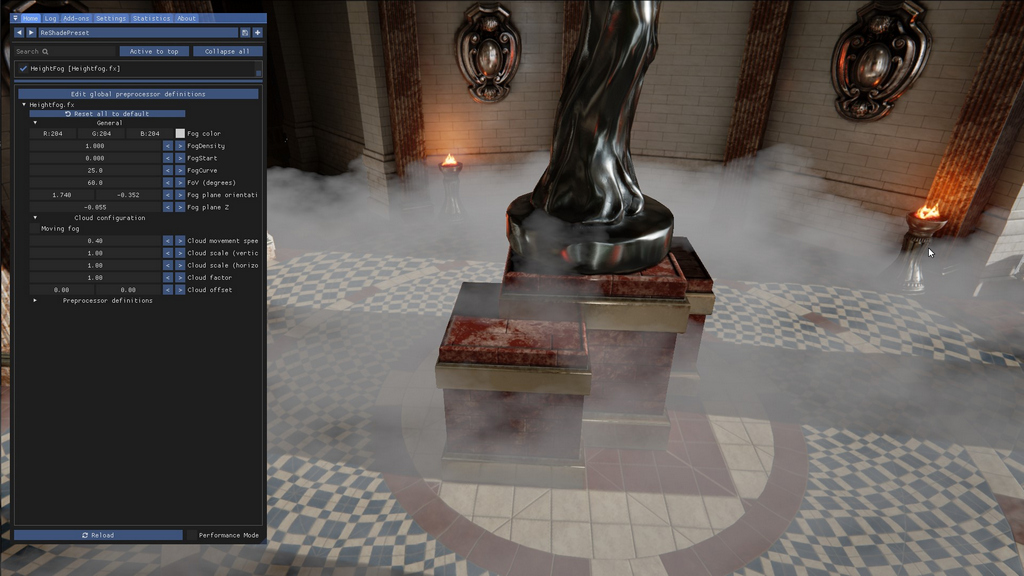 The fog layer aligned with the floor

Another value to tweak might be the FoV value. It's set to 60 by default, but if you're using a very wide window it might be needed to change the value a bit so the plane orientation values align better.

To change the color of the fog, change the Fog color parameter. This is fairly straight forward.

Now that we've aligned it with our floor, we can now tweak it a bit. The parameters for that are Fog density, Fog start and Fog curve. These three give you control over the thickness of the fog in the scene. The shader will calculate the thickness based on these values, so the more fog you look at the thicker it will be. Fog density and Fog curve are basically controlling the same thing, but Fog density gives a more fine-grained control over the Fog curve value. Fog start defines the distance from the camera where the fog should start. 0.0 is at the camera, 1.0 is at the horizon. 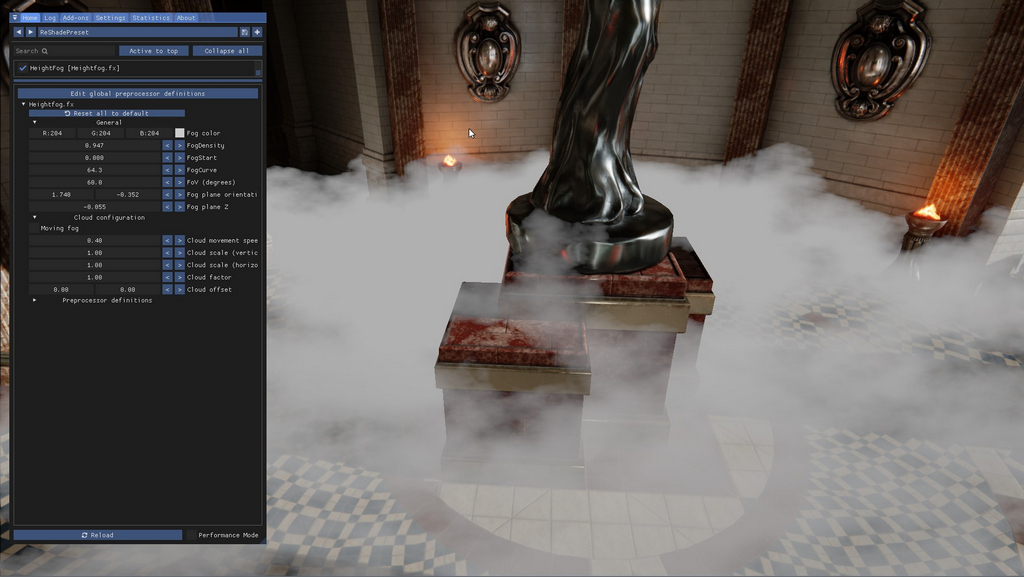 A thick variant of the fog layer

And here's the same fog setup, but now with a lower density and it is set to start further away from the camera. 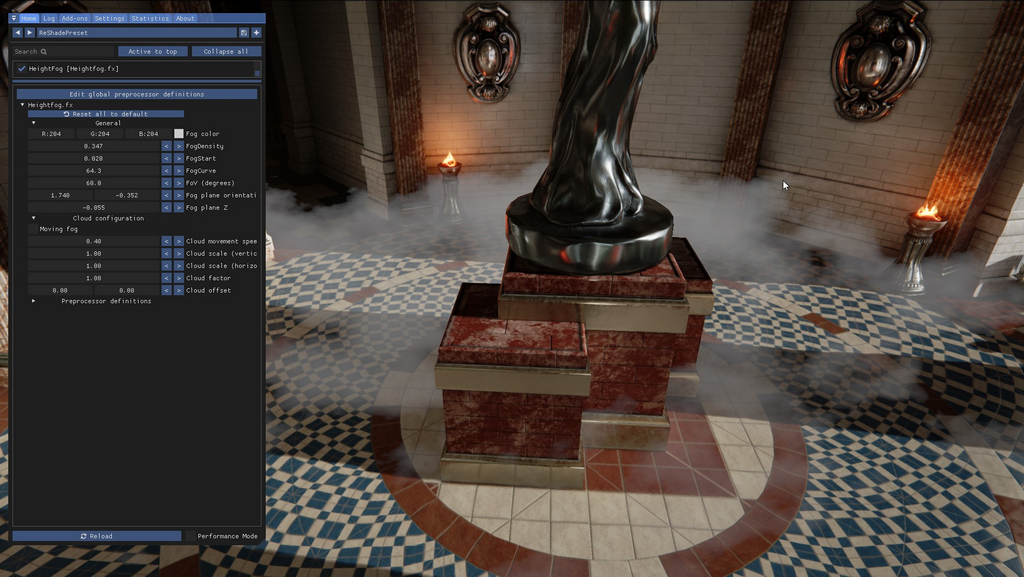 A thin variant of the fog layer, starting further away

The height fog uses a fog texture to create a cloudy / fluffy layer. You can control this cloudyness with the parameters under Cloud configuration. Checking the Moving fog checkbox will make the fog move slowly, and you can control the speed by changing the Cloud movement speed

The fluffy / cloudy nature of the fog layer has two parameters: Cloud scale (vertical) and Cloud scale (horizontal). The Vertical value is for how 'wavy' the clouds are. The higher the value, the more wavier. The Horizontal value is for the variations the fog layer has across its layer. Combined you can create the unique fog your scene needs. Below are a couple of examples

First both horizontal and vertical scale factors are 0: 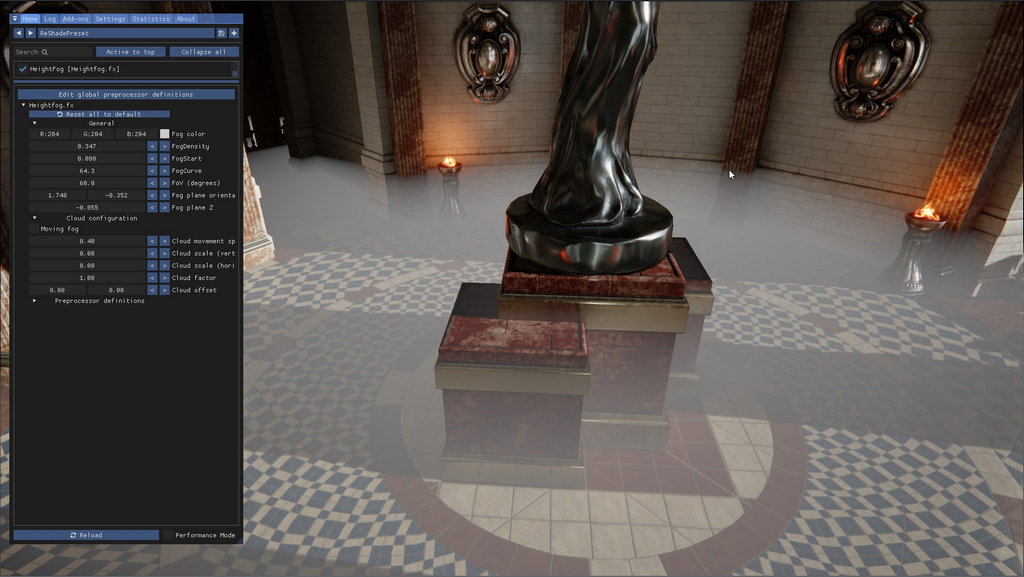 Cloud factors for horizontal and vertical set to 0 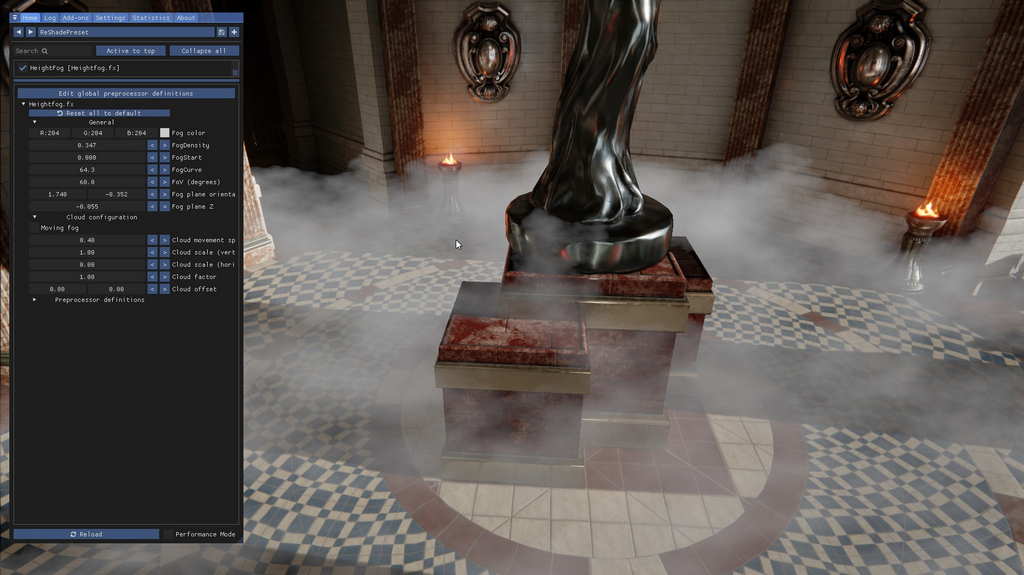 Cloud factor for vertical set to 1 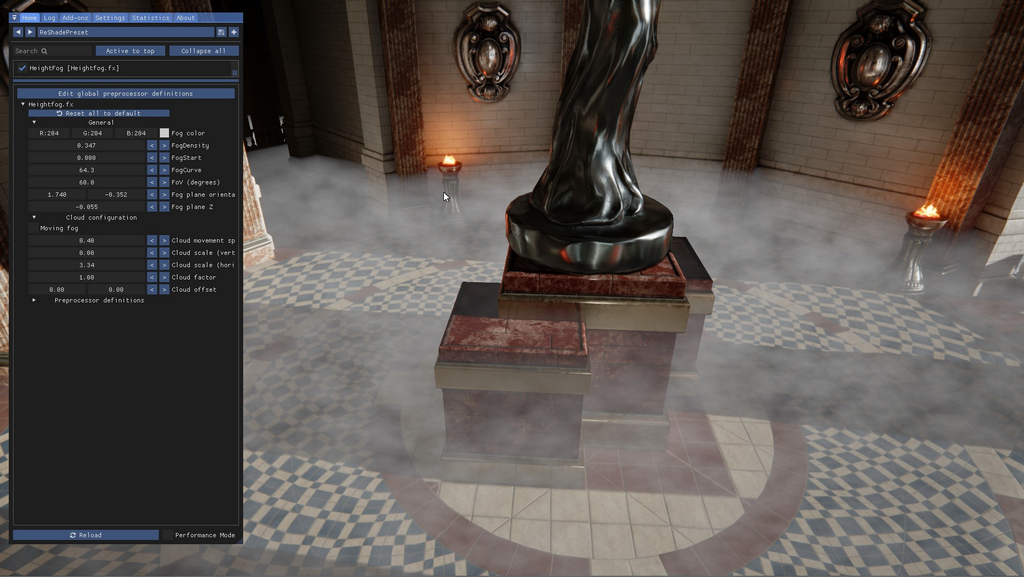 Cloud factor for horizontal set to 3

With higher cloud values it might be a cloud element is just at the wrong spot. To move it a bit, you can change the cloud offset values, which move the clouds over x or over y.