Engine versions supported: UnityExplorer supports most Unity versions from 5.2 to 2021+ (IL2CPP and Mono)

Identifying the type of Unity game

To know what files you have to install you have to first understand if the game is 32 or 64-bit, and if it's a Mono or an IL2CPP game.

Alternatively, you can look up the games page on the pcgamingwiki.

If the game is on Steam, you can check the file structure before downloading by going to the SteamDB page of the game, Depots section, and from the table in there, click the ID number on the game's depot (usually the one with the bigger file size).

If you happen to need it for something the Unity Engine version number can be found by opening the globalgamemanagers file found in the game's data folder, but it shouldn't be relevant to the guide at hand.

Download the appropriate version of each software, depending if the game is 32 or 64-bit and if its a Mono or IL2CPP unity game:

Even tho there is a BepInEx v6 (which is patcher/plug-in framework for Unity games) for Mono games, it is still recommended to use v5 since Mono support in v6 is still untested. Also, as you may have noticed by the table above, some plugins only work for v5 and they don't have a v6 counterpart.

For other optional mods put the .dll files inside the /BepInEx/plugins/ folder as well.

Launch the game and BepInEx will complete the installation process. If everything is working, a UnityExplorer window will appear. 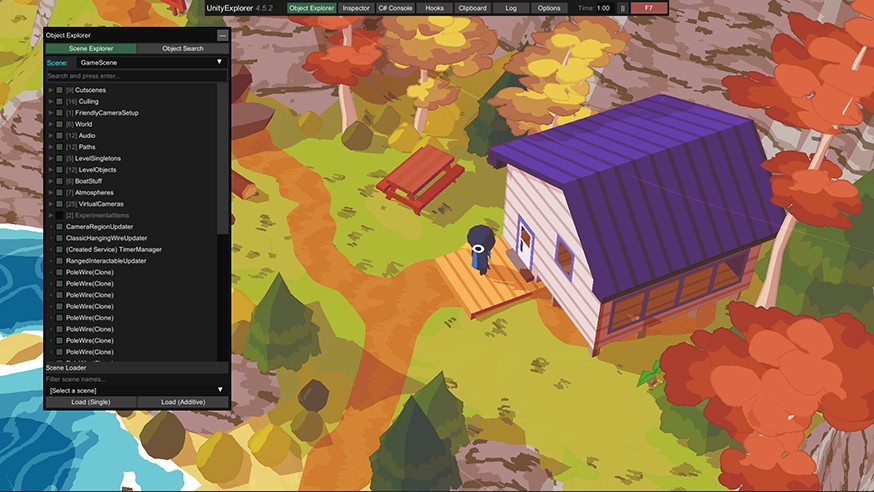 Follow the BepInEx Troubleshooting Guide to get a broken game working. The most common issue is a bad entrypoint. If you ever get lost in this guide I suggest watching the video above for visual aid.

As of now, there are two ways of getting a freecam working in Unity games, which are listed below.

If you want to use this method there are two main ways of doing so: With or without checking "Use Game Camera?" checkbox.

Without checking the "Use Game Camera?" checkbox, the unity explorer will create a new camera object for you to control, this means that some post-processing effects won't be displayed (because they are being applied to the game's camera, not the new one), making the game look "ugly" (it might also be useful in some cases where you don't some stuff from the game camera, like in Somerville where the gameplay cam didn't render behind the black bars, but this new camera did).

If you need these postprocessing effects for some reason you might want to check the "Use Game Camera?" checkbox in the freecam window. This will let you control the gameplay camera instead of creating a new one to control. However, take in mind that, in order for you to move this gameplay camera, you must first disable any component that controls the camera (most of the time called "Cinemachine"), so you can do it yourself.

To do so, after checking the "Use Game Camera?" (and "Begin Freecam") click on the "Inspect Free Camera" button, then on the Inspector window click on "Inspected GameObject" and disable the Cinemachine object. Remember to enable it again after finishing shooting the scene!

There might be a way of adding the gameplay postprocessing effects camera to the one created by Unity Explorer, but I haven't tested it myself yet, and probably depends on the game.

Controls (for both types of cameras)

Also, whenever you have to use this freecam again without the "Use Game Camera?" checked (meaning by following 1.1), make sure to click the "Reset" button on the freecam window to go to the gameplay camera position.

Even if this method is pretty straightforward, it has the problem which you can't move the camera position when the game is paused (with UnityExplorer's Time value or the TimeScaleController plugin). If you want to avoid this problem refer to the next section.

If you want to be able to move the camera while the game is paused follow the steps below.

If you want to avoid using this mod when the game is paused, another alternative would be to use the position sliders on the camera game object to adjust the position manually, altho this can get tiresome after a while.

You can tilt the camera by going to the camera game object sliders and moving the "Rotation" Z slider, as shown in the picture above.

To modify the field of view to open the Freecam window by pressing the top bar button of the Unity Explore, click on "Inspect Free Camera" (no matter if you have "Use Game Camera?" enabled or not, it will always return the cam being used for the freecam) and in the window that appears search for "fieldOfView" to change it.

Also, if you notice that while moving the camera, objects in the environment or subjects get clipped out of the scene (aka they get cut or disappear) then you should edit the draw distance properties of the camera (the same game object you used above). As a reference, change the farClipPlane to a high value like 9999 and the nearClipPlane to something small like 0.01 (if possible, I have had trouble introducing such low values).

There are multiple ways of pausing a Unity game, which are listed below.

There are two ways of pausing the game. An easy one is to just change the "Time" value at the top right of the UnityExplorer UI to 0.

Unfortunately, this can be cumbersome, especially if you want to capture action scenes. An alternative (and a very suggested one) is to install the TimeScaleController mod, as explained in the section below.

This mod will allow you to associate a hotkey with a value to change the timescale to. The default hotkey is the Pause button (should be near the print screen button, at the top right of your keyboard).

You can change the hotkey to another button by going to \BepInEx\config\vtrvrxiv.TimeScaleController.cfg and changing the default key, as well as the Speed (which I recommend setting to 0 for full pause), or using the BepInExConfigManager mod.

There is a chance that the TimeScaleController mod isn't working. If you press the hotkey and it doesn't pause the game chances are the mod hasn't been hooked up correctly. To fix this go to the Object Explorer -> Scene Explorer, open any of the objects listed there (that are enabled), type TimeScaleController into the inspector window's Add Comp field, and press enter.

Be aware tho that if the game ever destroys that object (e.g. when you change a level) then you will have to repeat this process again with another object.

As an alternative, you can also try using the game vanilla pause by pressing the Esc key, but you will have to disable the pause menu elements, turn off any additional shader the game might use, and even so it might not look exactly as in gameplay depending on the game. Use this method at your discretion.

As with the pause, there are a couple of ways of toggling HUD elements in a Unity game, which are listed below.

To toggle the different HUD elements off you can go to the Inspector window on the Unity Explorer, click on Mouse inspect in the top right, select UI and click on the UI element you want to turn off. It will prompt you with a list of objects. Try to disable them one by one until the hud element disappears from the screen. This also allows you to turn off other game objects, such as subjects or stuff from the environment.

Besides being able to toggle HUDs, the UnityExplorer allows you to modify a lot of the game objects' properties, like moving the position of light sources, turning off postprocessing effects, or hiding characters entirely.

Alternatively (and maybe preferably in the case of the HUD elements), you can use the shader toggler addon, which will probably be easier and would allow you to toggle the HUD off and on with a hotkey, which isn't currently supported by the UnityExplorer.

To turn off undesired effects for screenshots go to the object explorer window and search for a class containing the word grain (or whatever you are looking to disable). Open every object listed, look for the "active" property and turn it off (remember to also click on "Apply").

As shown above, there might be cases in which the object you open already has "active" turned off, or turning it off does nothing. Just keep trying with all the game objects on the list until deactivating one gets rid of the effect.

Spawn lights (and other objects)

Besides all the ways we already mentioned the Unity Explorer can be useful, it can also be used to spawn game objects, and among possible objects to spawn, lights are one of them. I haven't been able to make the lights do much shadow-wise. It might depend on the game, but if you know how to control these please let us know!

Regarding spawning another type of object, I haven't been able to do so with anything game-specific, nor have I found other classes of objects useful to spawn, but if you know some, again, reach out!

Also, if you want to turn off lights from the game you can do so by using the "Object Explorer" window in the "Object Search" tab, search for objects of class "UnityEngine.Light" and turn them off one by one. Altho this can be quite tedious. We are planning on working on a mod of our own to do this at some point, as well as improve the whole screenshotting workflow of unity games.

I should also point out that I am in no way knowledgeable of Unity Explorer nor Unity itself, so I have no idea if this is the right or most efficient way of doing things. If you know of a better way that could improve the guide please, once more, send us a message so we can include it in here.

If you need more information on how unity Light class works take a look at their docs:

BepInExConfigManager is an optional but useful plugin for configuring other plugins' hotkeys and options without restarting the game. The menu to do so can be opened by pressing F5.

If it doesn't seem to work, try following the steps explained in the warning box in the Pause section.

The ScreenshotTool plugin allows you to take screenshots at resolutions up to 16x the current resolution.

Screenshots will be saved in the game's GameName_Data folder located in the same folder as the exe.

Keep in mind that postprocessing effects like ReShade won't be shown in shots taken with this plugin. Also, almost all unity games can be hotsampled to custom aspect ratios, so you can hotsample the game instead of using this plugin, especially if you want to use reshade in your shots.

As explained above, if this mod doesn't seem to work, try following the steps explained in the warning box in the Pause section.

There are different ways of turning on debug options in your game. One is using the EnableIsDebugBuild plugin, but you may still need to find the unique button combination to enable these features.

A second method that you can try is going to the object explorer and typing in the class field the word Debug, and looking up objects of said class.

As an alternative, you can follow this guide or this guide which are most exhaustive, but exceeds the purposes of this guide.